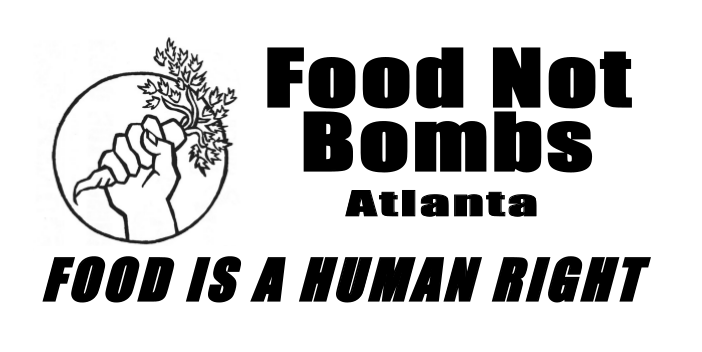 Atlanta Food Not Bombs has been sharing free food with anyone who is hungry for over a decade.  We believe that food is a human right, and that no authority should be able to prevent anyone from eating.
Georgia State University Police has begun a campaign of harassment aimed at anyone who tries to share food with people in Hurt Park downtown.  They claim that giving away food is illegal without a food service establishment license from the City.  The cops’ legal claims are confusing, contradictory, and ultimately false.  What it comes down to is that they don’t want homeless people in the park, they want them to go somewhere else.
But when they’re forced out of the park, the homeless won’t be going into a shelter, since the City finally won their years-long fight to shut down Atlanta’s largest shelter.  And they certainly won’t be going into housing, in a city where gentrification and speculation has created what many are calling an affordable housing crisis.  Developers, university administrators, and city planners do not care that there’s nowhere for poor people to go.  As far as they are concerned, the homeless are a nuisance to be dealt with the same as rats and pigeons.
The cops have already charged one of our volunteers with this supposed crime, but we will not stop.  If the government makes sharing illegal, then we have no choice but to be criminals.  Not just because our conscience requires it, but because helping each other is the only way we will all survive.
We call on everyone who opposes this repression to stand against it directly: Come to Hurt Park next Sunday and occupy it with us.  Bring anything you want to share: food, resources, services.  Bring music, fun, and festivity.  Let’s show that a park full of people caring for each other is better than a park sanitized by police.
Sunday Nov. 26th – 2pm
Hurt Park, Atlanta GA
We also invite anyone who’s interested in supporting Food Not Bombs to come to our planning meeting, Saturday Nov. 25th, 7pm at 80 Mayson Ave NE.