A Wendy’s employee verbally harassed, shoved, and sprayed Windex on a customer because he’s Black and the employee thought he was homeless and gay–and the manager backed him up.

Around 11:25AM on 2-28-16, while visiting a Wendy’s franchise, I was discriminated against and threatened with physical assault by one of your employees. I was not able to receive a name from this employee because he was not wearing a name tag and refused to tell me when asked. For the purposes of documentation I will continue to refer to this employee as Bully. The experience is documented as follows.

I entered the Wendys (#1496) located on 1025 Ralph David Abernathy SW Atlanta, GA 30310 and sat near the back of the store to read a book and finish a manuscript I had been writing before ordering food. During this time I was targeted by Bully. Bully began his verbal assault by comparing me with another employee named Willie. Claiming that we were twins based on the color of our skin and style of our hair. I ignored his remarks and continued reading.

After this barrage I took out my phone to record him. The situation became tense when I asked him his name (so I could file a complaint) but he refused. When I asked the manager on duty for information she also refused, denied me service when i tried ordering food, and told me to leave the store because i recorded Bully for bullying me. At this time Bully put his hands on me without my consent and pushed me against a wall trying to guide me to the exit without my belongings.

I protested but proceeded to gather my things (forgot my white cell phone charger). Bully claimed I wasnt moving fast enough and called in my aforementioned twin Willie to back him up in his intimidation process. To Willie’s credit he seemed unwilling to be a part of the whole ordeal. I left the store but stayed to look around the property for information that the manager was unwilling to give me (store #, address, phone number) to properly document my case to which police officer K. Smith (#6262) arrived on duty.

After hearing my situation, officer K. Smith guided me back into the store and helped me receive the information I needed but he was unable to make the employees identify themselves. At this point I thanked officer Smith for his service and left the store. 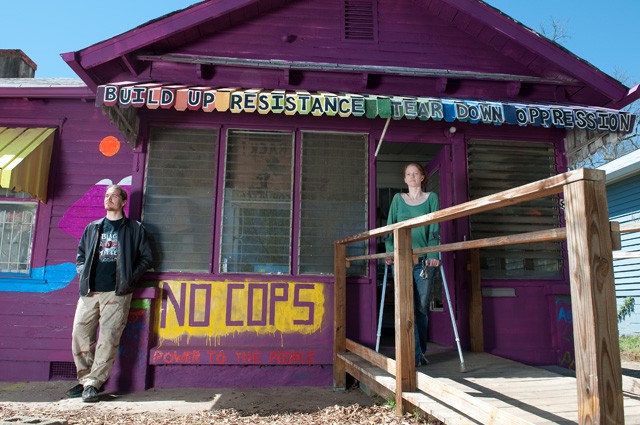 Samantha Reardon wrote a pretty good article about the fight over political art on our house.

Thanks to everyone who has participated in this struggle, every bit of help makes a difference.  If you want to contribute art to the house, or have any other ideas for standing up against gentrification in Edgewood, get in touch.  When we fight together, we can win!