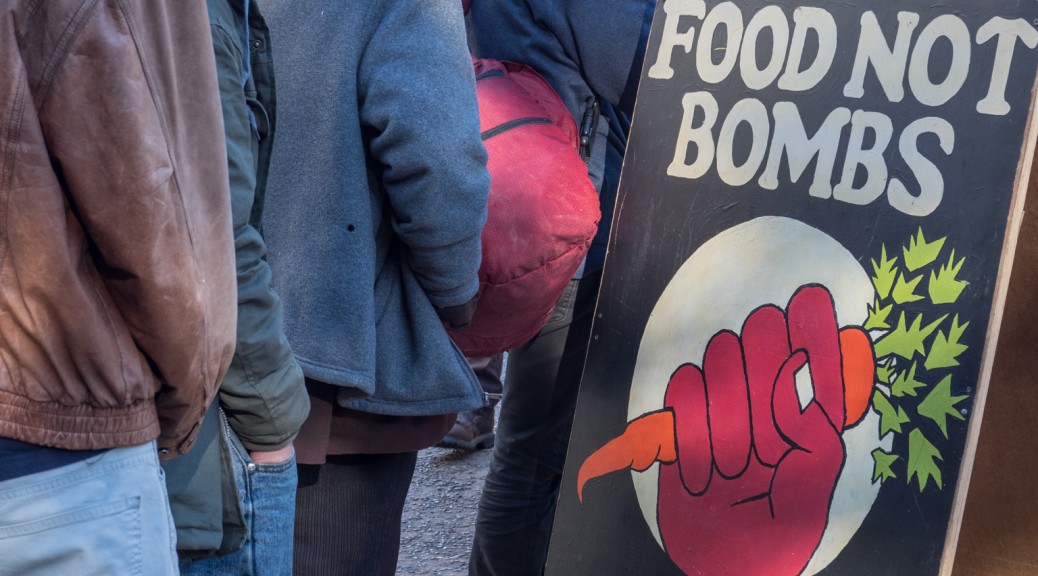 Cops in Atlanta claim it’s illegal for us to share food with each other. Earlier this month, a volunteer with Food Not Bombs was charged with a crime for giving food to homeless people without a permit. We do not care what the law or the police say, so we vowed to continue disobeying them. On Sunday we followed through.

Hundreds of people from many backgrounds flooded Hurt Park in downtown Atlanta. Anarchist youth, church groups, homeless veterans, liberals, travelers, BLM activists, people of all ages and genders showed up to participate in the illicit practice of public sharing. We came prepared to face repression, with copwatch teams on-hand and plans in place for dealing with physical interference by the cops. But bullies are also cowards, so we knew that when faced with huge, vibrant, disobedient crowds, the cops would most likely be too scared to even approach. We were right! The police ceded control of the park, allowing an autonomous festival to occupy the space instead. As the day went on, food, clothes, and other resources continued to arrive in the park, all brought by people we had never met, but who shared our outrage that the city would try to suppress such a basic human activity. Homeless people helped to distribute and manage the resources. The lines between giver and receiver blurred, and for a time we got to enjoy simply being people in the park together. The cops, developers and politicians dream of a completely sanitized downtown where public space only exists for people to move through on their way to work, school, or to patronize a business. They want downtown to be fun and friendly for tourists and young professionals while simultaneously being hostile and uninhabitable for the rest of us. The homeless, black people, queer youth, and many other marginalized people do not fit into this agenda. The City will try anything to rid itself of these “undesirables”, enlisting the support of police, university officials, the Chamber of Commerce, even the very “non-profit service providers” which claim to serve the homeless.

There’s no reason to think this fight is over.  The police are probably waiting for an opportunity to strike again. We have to make sure that when they do, Atlanta is ready to make them regret it! Thanks to John Ramspott for the photos.  To support Food Not Bombs and other grassroots solidarity efforts in Atlanta, donate here.